The fact I get to buy a new pushchair this time round really excites me. When we had Sienna, we didn't have much money at all. My parents actually purchased her pushchair for us and we went for the whole Hauck travel system purely to save money. It did the job but this time round we are better off financially so I really want to get a nice pushchair.

Immediately I thought I'd have to get a double stroller as Sienna still uses the pushchair a lot, especially when I go shopping. She can obviously walk a fair distant but I can't expect her to walk around shopping for hours and not run off; it just makes my life easier if she is strapped in!

However, I do have reservations about a double stroller even though it is ideally what we need. We live in a small town and the pavements are barely wide enough for a regular pushchair let alone a double! I also imagine them a nightmare getting around Primark and I also worry if one would fit in the boot of my car (A peugeot 307 if you're wondering). 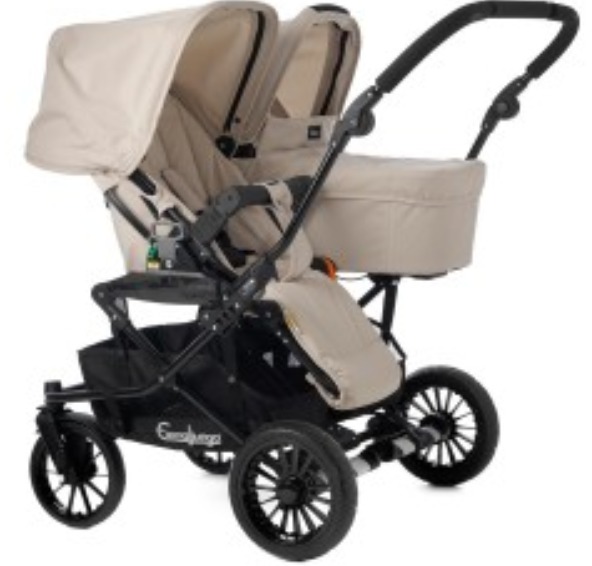 I have already fallen in love with the Double Viking by Emmaljunga (see picture above). I really want a carrycot for this baby as I think they look really pretty (is that weird?!) and I love, love, love the colours of this one too (although probably not practical..), it's exactly how imagine my double pushchair.

This one does have one more plus point than a regular double pushchair as it says it is only 79cm wide so does still fit through standard doorway, so that is good. But I still worry about the other issues.

Otherwise we are thinking of getting a double pushchair but one behind the other. I'm not too keen on them as one child always looks like it is practically sat on the floor and can't see much but we may have to go down that route. I've seen that the Emmaljunga brand actually do the 'Super Viking' which can be made into a double one behind the other, but you have to order the adaptor and seat unit/carrycot additionally which will probably work out more expensive over all. I'm also still not sure if they fold down much smaller so would it fit in my car again?!

It's a big decision to make as double strollers are a lot of money and I don't want to regret it or be unhappy with my choice. I think we will spend the next few months thinking about it and not rush into buying anything quickly.

Any thoughts on double strollers would be greatly appreciated to help us decide! :)