Christmas can be such a magical time of year and I really want Sienna to think of it as that. I remember when I was little, we had little traditions we would do every Christmas and it made me even more excited for it.

For Sienna, I am going to take some of the traditions my Mum used to do for us and implement them in our house. One of my favourite things that my parents used to do is make the house look like Santa had been but not just in the way of presents being left. We used to come down the stairs and hallway and there would glitter everywhere.. that was the trail Santa left. They would also be a Santa hat somewhere.. stuck in the letter box or dropped on the floor.. the idea was that Santa had forgotten it when he left the presents! Obviously now I know it was my parents but at the time it made us all SO excited! I can't wait to do this for Sienna. 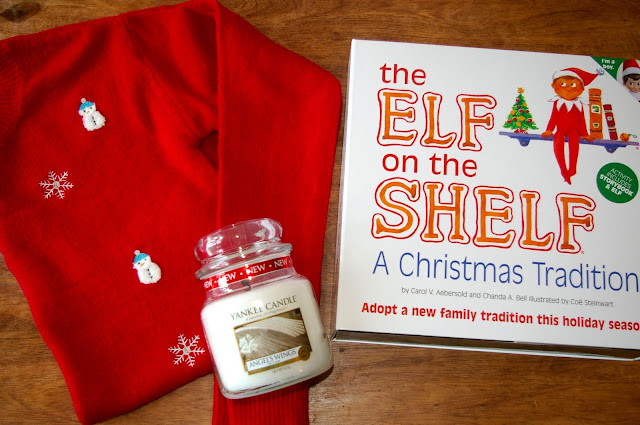 As well as using the things my Mum used to do, I also want to bring in some new ideas and hopefully make them our family traditions. My first idea is to get us all Christmas jumpers to wear every Christmas day. This might seem obvious to some people but we never used to get Christmas jumpers when I was little. I already have mine, it is this red snowman print jumper* from New Look! I love it, it's christmassy but not over the top and red is probably my favourite christmas colour! Now I just need to find Sienna & Warren one!

"What with having to make all the toys for the entire world, Santa has his hands full every Christmas. So, he sends one of his Christmas Elves to each house to see which children have been naughty and which ones have been nice.

...Touted as the best thing since ‘The Night Before Christmas’, The Elf on the Shelf gift set comes complete with story book and North Pole elf who can sit on your mantelpiece, on a table or even nestled in the Christmas tree so he can keep an eye on the children of the household...

When you receive the Elf and read the book as a family you will realise that the elf doesn't have a name so his magic won't work! But don't worry, all you have to do is register using the details provided in the pack. You just have to pick a name of your choice to call the elf and you will then receive an adoption certificate making him a official member of the family.

The Elf reports back to Santa each night and gives the naughty and nice report. Each morning before the children awake the elf has used its “Christmas Magic” to fly back to a new vantage spot for the day to watch over the children. It is a fun hide-and-seek game for the entire family during the holiday season!"

I seen a lot of people doing it last year but thought Sienna was a bit too young but this year I think she will understand! I love the concept of it, I'm a big Toy Story fan so anything like this where toys come alive is right up my street! I hope it will also encourage good behaviour as well as an element of excitement every morning when Sienna sees where he is or what he's been doing.

Another tradition I want to do is something more for me. I want to buy a new scent of yankee candle every year! Yankee Candle is the ultimate candle brand for me, last year I went for a medium Christmas cupcake but this year I have gone for a medium Angel's Wings* and I love it! It smells fresh due to the flower petals but has a hint of sweetness thanks to the vanilla and sweet spun sugar.
Check out the whole Yankee Candle Christmas range here.


I can't wait for December now!

What traditions do you have?