Loving your dad is no crime..

David Tennant was moved to tears by his father's heartfelt tribute at the 2015 National Television Awards (NTAs). The Broadchurch and Doctor Who actor received a Special Achievement award at the ceremony and dedicated it to his father, who spoke lovingly and admiringly of his son.
During a video round-up of the Scot's career, the very Rev. Dr Alexander McDonald said: "He does love people, and that's a great gift. In this day and age, to love people makes the world a better place. And I think David, in all that he does, makes the world a better place…I mean, as you must realise, I'm his dad." 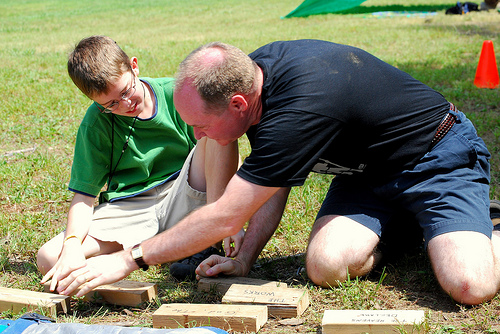 Tennant, himself a father of two children and step-father to a third, seems to be a shining example of how relationships between fathers and sons can mature into enduring friendships based on mutual respect and appreciation. So, how do you make it to that point?  Tennant is notoriously private about his personal life so we can only guess at what kind of childhood he had.
One thing is for sure, his dad wasn't the type to take him down to the park for a kick around. Tennant is famous for his dislike of football - he doesn't support a team and it's unlikely that, despite his proud heritage, he's ever dabbled in any Scottish football betting.
So, there's hope for all fathers and sons who spurn the national sport and embrace alternative bonding experiences instead. The truth is, it doesn't matter what you do together, just that you do something together. It does not have to be football. Whether you take your boy to the movies, join a laser tag league or just simply help him with his homework, shared experience is an important link if you're to form an unbreakable connection.
Doing stuff together tells your son that you're happy to make time for him because he's important to you and he's fun to be around. Listening, chatting and sharing stories with one another is a natural by-product of spending time in each other's company. And that's a valuable habit to form early on. These days there's a tendency to trivialise fatherhood and the important role that dads play in raising their children, male or female.
The character of Daddy Pig in the kid’s cartoon favourite Peppa Pig is the butt of lots of jokes and Homer Simpson is portrayed as an idiot in the iconic US series. Last year the Early Learning Centre was forced to withdraw a TV ad that suggested the only role fathers played in their children's lives was to tell them where Mum is.
Surprisingly enough, there are a number of celebrity dads who are setting a good example and proving that fatherhood is not to be laughed at. David Beckham, Gary Barlow and Jamie Oliver, for example, have all been praised for their parenting skills.
Who can guess what kind of relationship Tennant had with his dad while growing up. But judging by their touching exchange at the NTAs, chances aretThe very Rev Dr McDonald was doing something right.