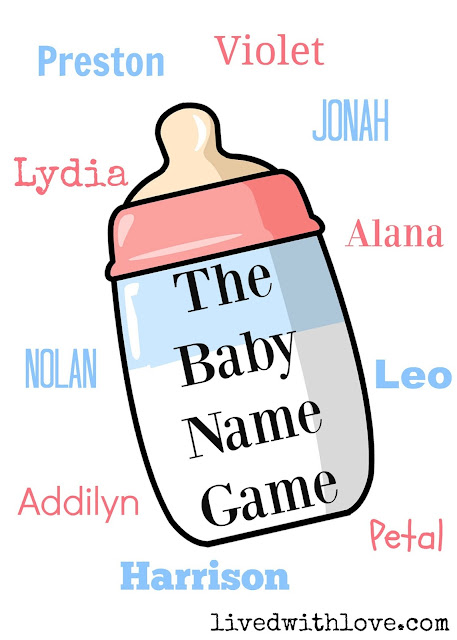 When you find out you're pregnant, it's exciting to think of baby names but 4, 5, 6 months down the link, it can become tedious and really hard. With Sienna, we changed our minds so much throughout the pregnancy as we are both quite fussy. I like quite unusual/uncommon names.. most of which Warren doesn't like but he's not keen on common names either. We had a boys name we liked; Lucas but I was never 100% set on it even though we referred to 'him' as that (we were sure it was a boy!). We had a list of girls names to choose from; top of the list was Sienna Olivia and I was pretty sure if it was a girl, that was going to be her name as it was the only one we both agreed on.

This time round I dreaded finding a name, I felt like we exhausted all our options for names last time so it would be ten times harder this time round. I set about looking for names straight away as I was certain we wouldn't agree on one until the birth! Warren had a boys name that he liked.. he actually liked it when we were trying to name Rocco but back then I didn't like it. This time it had grew on me so we decided on that for a boy.


When it came to girls names we only had 2 on the list when my 20 week scan came round but again we were convinced it was a boy! We found out it was a girl and to my surprise, as soon as we came out of the scan, Warren said to me 'yep, her name is definitely ___, I don't even want to look at any other names'. I was shocked he was so sure as he's usually so indecisive but I was glad as it was the name I liked the best! On the way home we were discussing middle names and quickly agreed on one we both liked as well. I was happy our baby girl finally had a name and the name game was over. I still can't believe we have settled on her name at the halfway point, I thought she would be baby no name for a few days after being born.

Even though we are both 100% set on her name, we have decided to keep it a secret until she is born. It's not incase we change our mind but it is so we keep some excitement when the time comes. I really don't like knowing the gender and the name before they are even born. It gives everyone something to look forward too even more so than her being born.

I'm so excited, I love her name as much as Sienna's and think it goes perfectly with her name too. I think it's going to be hard to keep it a secret in the meantime as we (including Sienna) call her it all the time but we will try our hardest ;)

Let me know what name you think we have chosen as it's always fun hearing that!