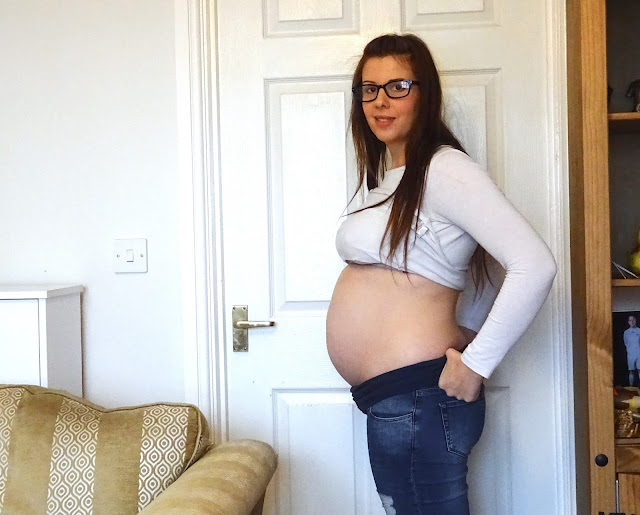 How far along? 28 weeks!! Third trimester!!
Total weight gain/measurements: I don't weigh myself!
Maternity clothes: Still in the same ones, no new ones yet!
Stretch marks? No new ones still thankfully! I am applying oil most nights when I remember.
Best moment this week: Warren seeing a big kick from her when he was sat on the sofa the other side of the room! It was huge it really hurt haha! They are getting so strong. Also being in the THIRD trimester!
Miss anything? Feeling 'normal'. I have felt awful this week due to migraines and not sleeping well because of backache. That explains the awful photo above, I was feeling horrendous and just used the first one I took!
Movement: All the time, mostly at night annoyingly haha.
Food cravings: All the bad stuff again.. carbs, chinese, chocolate, BACON!
Anything making you queasy or sick? I've been feeling sick from my migraines but that's all.

Labour signs: Nope!
Symptoms: Migraines have been torture this week as well as pregnancy insomnia and back ache! Woo! Only 12 weeks to go... (hopefully).
Belly button in or out? In
Wedding rings on or off? Engagement ring on
Happy or moody most of the time? Moody because of the migraines, I'm so sick of them! And so so tired!
Looking forward to: These migraines hopefully going some time soon?!