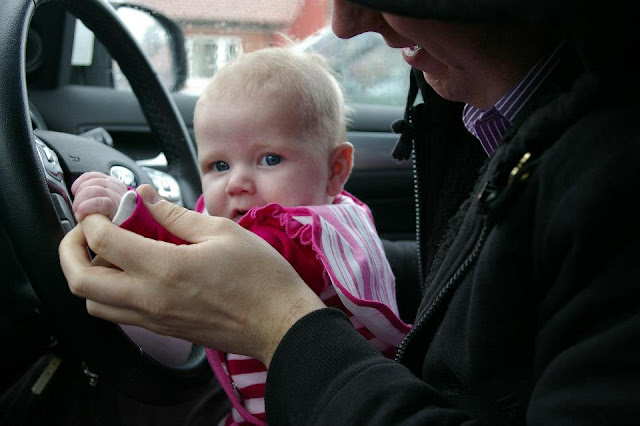 (Sienna aged 3 months during a trip to Liverpool)

Over the past few years, we've done a few journeys to Liverpool as Warren has family there. With a straight run and no stops it would take about 3 and a half hours, but add traffic, pit stops and kids into the mix and it takes about 6! We went up a few weeks ago with both girls and surprisingly it wasn't as stressful as I thought. With Aria being only 2 months, I was expecting the worse. We took Sienna when she was 3 months and the journey was horrendous!

That is our most memorable journey to Liverpool and we still talk about it now, we even told her the whole story the other day and she found it hilarious!

Basically everything that could go wrong, went wrong. As soon as we hit the motor way, we hit the traffic and of course Sienna decided she needed feeding and starting screaming and screaming! I had to climb into the back seat with her and feed her the bottle while she was in the carseat. She took the bottle and went to sleep which we knew was too good to be true!

After we started getting through the traffic and moving a bit faster, we just heard her throw up everywhere! We had to pull over onto the hard shoulder and try to clean up as much as we could, it had literally filled her whole carseat and everything was wet and covered in sick. Gross!


We cleared everything up as best we could and checked she was ok (we now know she is car sick but when she was 3 months old, it didn't even cross my mind it could be that!). We got a bit further and were calming down from the stress when we heard her do a poop. We said we'd get off at the next services as they weren't too far.

When we got there, we took her out the carseat and it was the biggest explosion I had ever seen, I didn't even know how I was going to carry her into the services to get the baby changing toilet! We somehow managed it and both went in together as it was a 2 man job for sure. When we took her baby grow off we didn't know where to start,, it was literally up to the neck hole on her vest! We had to throw all of her clothes away and we had to try and bath her in the sink as wipes wouldn't cut it!

We laugh about it now but at the time I was so stressed and wondering what I'd let myself in for with having a baby, haha! It obviously didn't put me off too much though as here I am with another 3 month old! We will try and not go on anymore long journeys for a while though.. either that or use an car hire company like Auto Europe so that at least if this happens again, it's not our car that's ruined! haha!