How we taught Aria to self-settle; The pick up, put down method 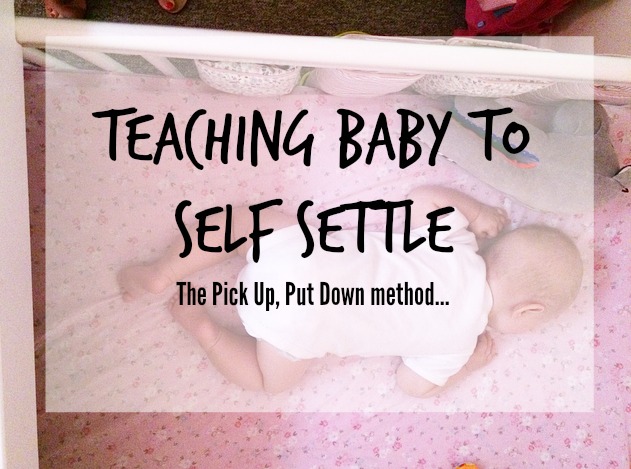 I mentioned in my post about the 2-3-4 sleep schedule that the only way I could Aria to sleep was either by her falling asleep on the bottle or in the car. So if we didn't go out for the day or nap time didn't coincide with a feed, I was pretty much screwed and she wouldn't nap.

Once I figured out the timings of her naps, I tried to work on self-settling as it was crucial for her sleeping properly. I know some people don't agree that babies can learn to self-settle but we did it with Sienna and she is a fab sleeper now and she doesn't seem like she has been neglected. I never leave them to 'scream it out'.

With Sienna, we did the controlled crying but with Aria I wanted something a bit more gentle because she is a bit more sensitive and tends to get herself in a bit more of a state than Sienna used too. So I found the 'Pick up, put down' method.

The method
1. You baby down to nap at nap time or bed at bedtime, hopefully they are slightly drowsy because it is the correct sleep time. (If it coincides with a feed, I feed her in her cot but I make sure to sit her up and wind her to 'wake her up' a little bit before lying her down and letting her self settle. I try not to let her fall asleep on the bottle).
2. If she cries, pick her up. Use a 'shh' to comfort her but don't engage much more than that.
3. As soon as they have settled/stopped crying, you lay them down again.
4. If she starts crying again, repeat step 2 and 3. Keep going until she starts to stay settled when you lay her down.

My experience
It is more gentle than controlled crying but because of that it takes longer. I'm not going to lie, the first night I must have picked her a hundred times over an hour and a half and she wasn't getting it. So I gave up & made her a few ounces in a bottle. After half an ounce she was out for the count and fell asleep on the bottle. Fail.

I didn't give up, I tried the next night and it took 40 minutes but I finally laid her down, she looked at me, closed her eyes and went to sleep. Result!

I continued for the next few nights and she seemed to get it properly around day 6. Bed time normally coincides with a bottle so I do what I mentioned above. She's now normally asleep within 5 minutes of finishing her bottle, after being winded and self settling herself.

I started only with night time to begin with and then once she'd cracked that, I started on nap times. Nap times can be harder as 2 weeks on and I can put her down awake for naps & bed time and 9 times out of ten, she'll fall asleep by herself. Sometimes I have to go back in pick her up and she's get sleepy on me instantly, I put her back down and she's fine. I only ever have to do this the once if she's been crying or unsettled for a few minutes. Sometimes she grizzles and groans to herself but I leave her now unless she is properly crying.

She's getting much more sleep & bed time is no longer such a battle which is a win all round in my eyes!