Happy Friday everyone! Long time no speak on my blog but I am trying to bring it back now I am out of the baby stage with Roma. She is now 15 months old, so very much in toddlerville. It's easier in some ways yet harder in other ways but I am hoping to find slots of time to be able to blog again as I have missed it so much!

For today's post, I thought I would do some before and afters of the house so far - we are 9 months into renovating and we now have every room functional (although not 100% finished). It is maybe slower than other peoples but we are doing ours on a budget- month to month and with 3 kids so honestly what do you expect? haha!

Ok so on with the photos as that's what you're really here for, right?!

Firstly, here is our whole empty house tour before we started anything:

I'll start with the kitchen as that has had the most drastic change! Here is the before photos: 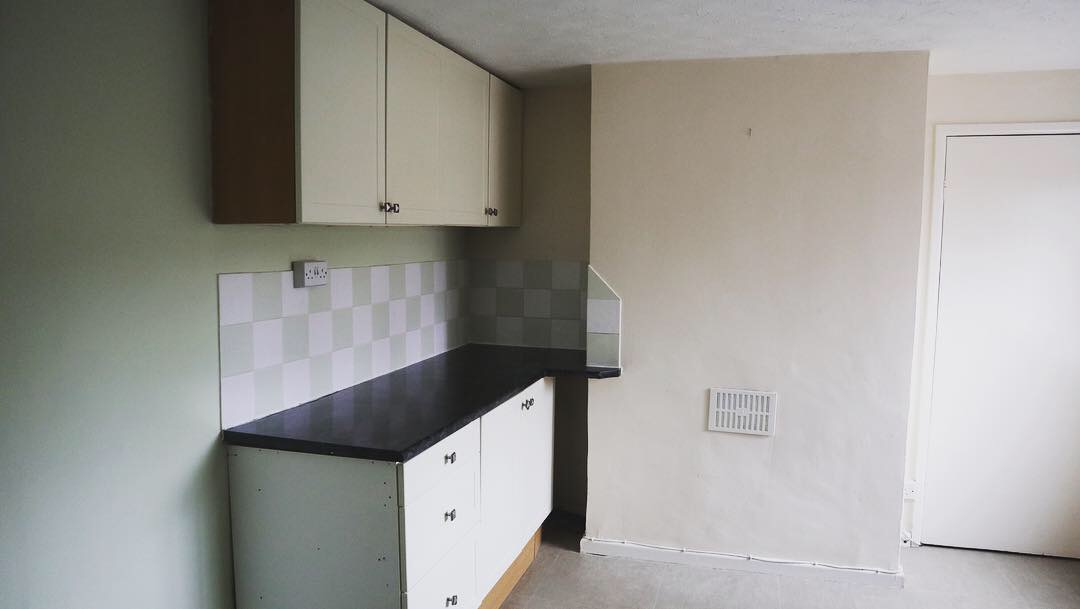 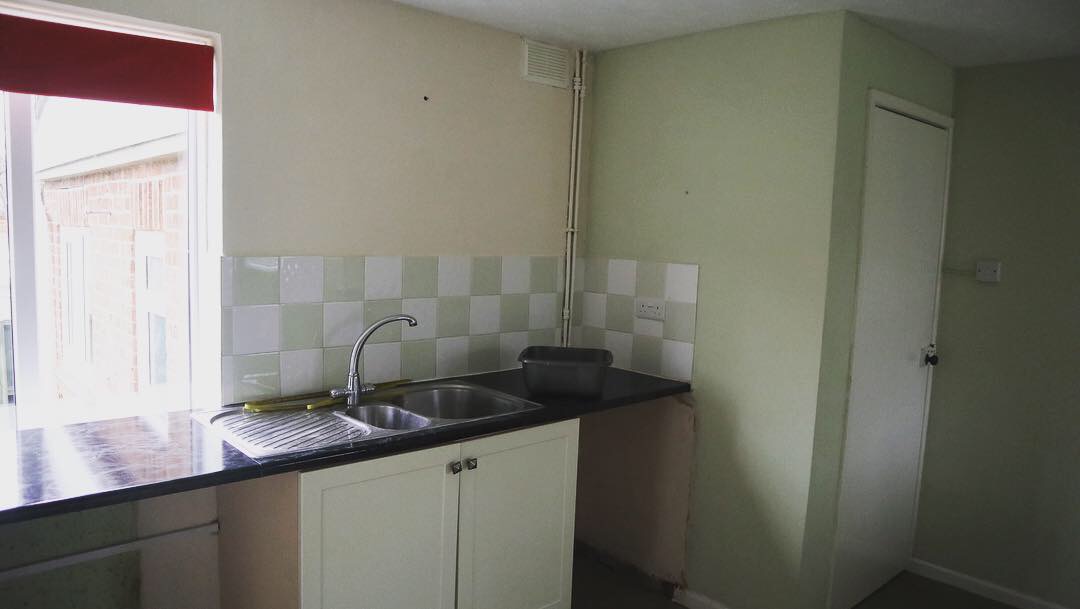 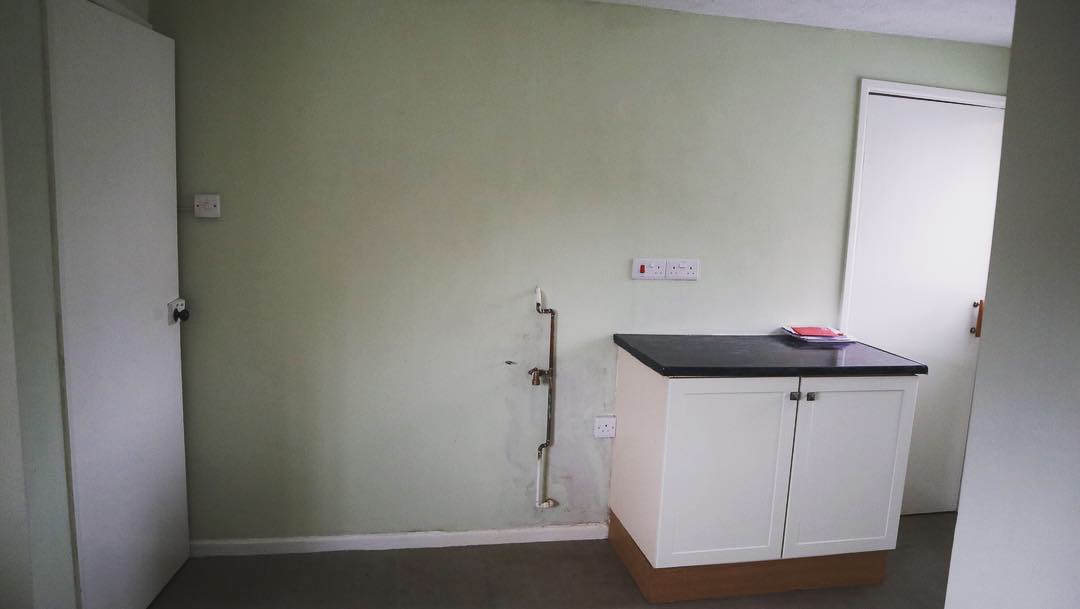 and this is how it's looking now (a video was easier to show):

Kitchen is slowly coming together and I even managed to declutter it a bit today! Slight hiatus on the tiles as you can't tile directly over hardwall .. Who knew?! So we need to get some different adhesive or primer before we can do the corners where the sockets were chased in! Left to do is: tiling, skirting boards, change doors, lighting & then decorative bits such as clock, signs, prints, plants and bits to faff with 😂 tile gifted from @tilemountainuk #ourdailyrenovation #ourrenovationstory #storyofourhome #mydailyrenovation #kitchentiles #herringbonetile #navytiles #tilemountainuk #kitchentour
A post shared by The ConwayClan (@homeoftheconways) on Nov 20, 2019 at 10:44am PST


We had to remove the chimney breast to fit our range cooker into it and so it was safe, we decided to move the chimney stack from the whole house! I will do a separate blog post on this as it was a big just, took a long time and I have a lot of photos! But it was worth it, we are so happy with how our kitchen is looking. It's obviously not finished - we need to finish the tiles (we are doing them ourselves) and get new skirting boards etc.. but it's miles better than it was before and how I imagined it would be!
The bathroom hasn't changed - we haven't touched it at all as it wasn't the biggest priority on our list and was useable. We do have plans for it in the future but for now it's doing just fine! 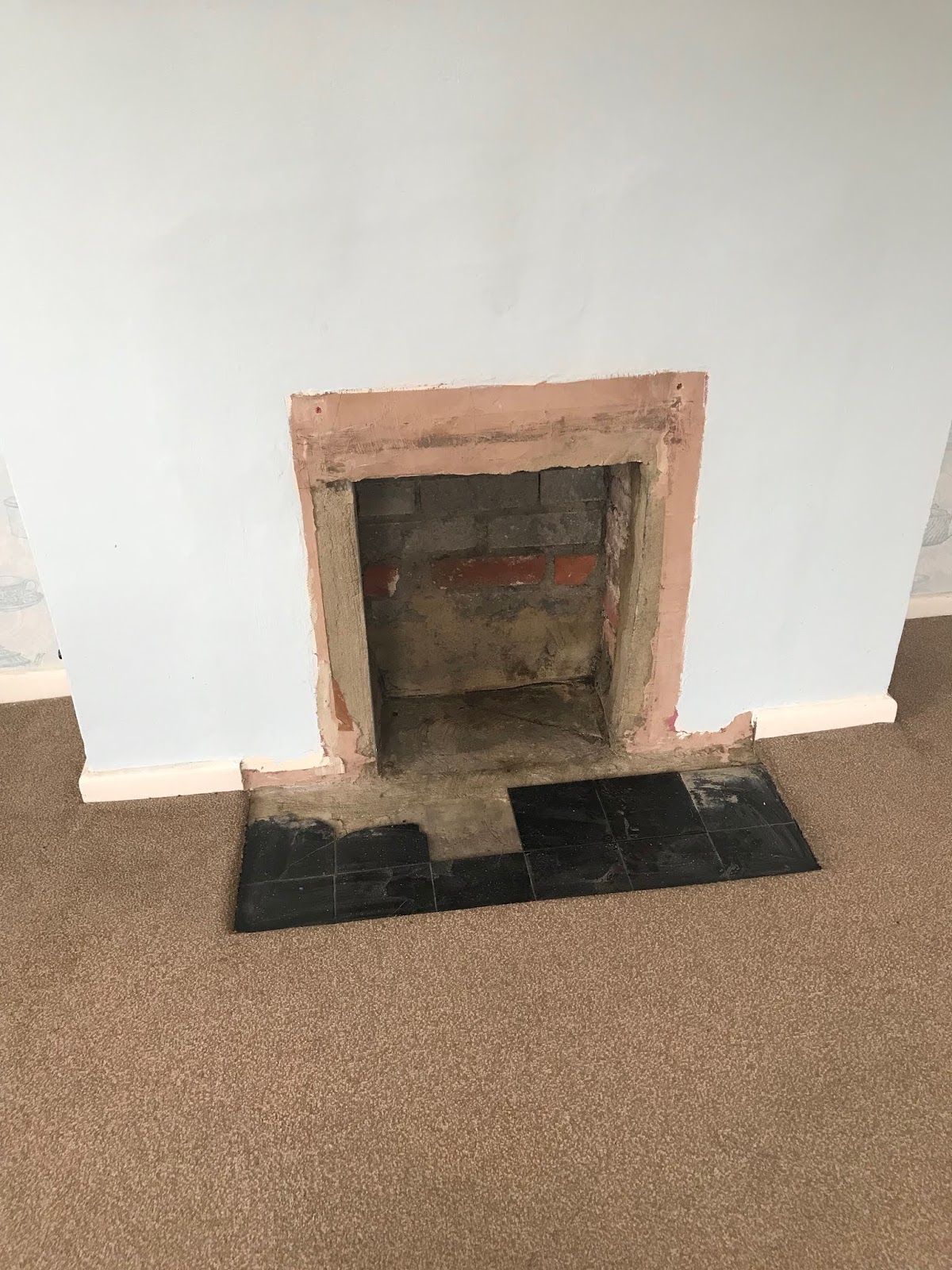 
It's not finished or styled yet but couldn't resist posting a photo of our new fire surround! Everyone's been asking where it's from.. It's the regent fire surround from B&Q (but it's actually a little cheaper at screwfix) - I love the contrast of the rustic bricks with the clean, white, more modern surround! I'm just unsure about the hearth.. I think I want some patterned tiles but nothing too colourful as I want a colourful rug and prints on the wall eventually. I do love the star tiles but feel like everyone has them now 🙈 it's either that or a simple black slate.... I can't decide (as always) #mumof3 #mumof3 #homereno #mydailyreno #ourrenovationstory #storyofourhome #mydailyrenovation #ourfamilyhome #cornersofmyhome #firesurround #whitefiresurround #poundlandcommittee
A post shared by The ConwayClan (@homeoftheconways) on Nov 14, 2019 at 10:25pm PST


I love it! I've always wanted a fireplace, especially at Christmas to hang the girls stockings and this year I can. We did the brick surround with Kuci Design brickslips - we went for the Old Lambeth Blend as I love a rustic look and I am so happy with how it turned out. They were great quality and were really easy to use - plus they look so effective! Our surround was from B&Q and we are yet to sort out the hearth as we can't decide what to do there but again it's getting there and looking so much better than before!


The other biggest change is Sienna's room - the was also a big makeover as the corner of the chimney breast was in the corner of her room so it was a building site for a while and she was sharing Aria's room. The chimney was removed, we had to plaster board and replaster the corner and we also moved the loft hatch from the hallway to this corner too - it made sense as the hallway is not the widest to get up and down and we had a whole in the ceiling already! 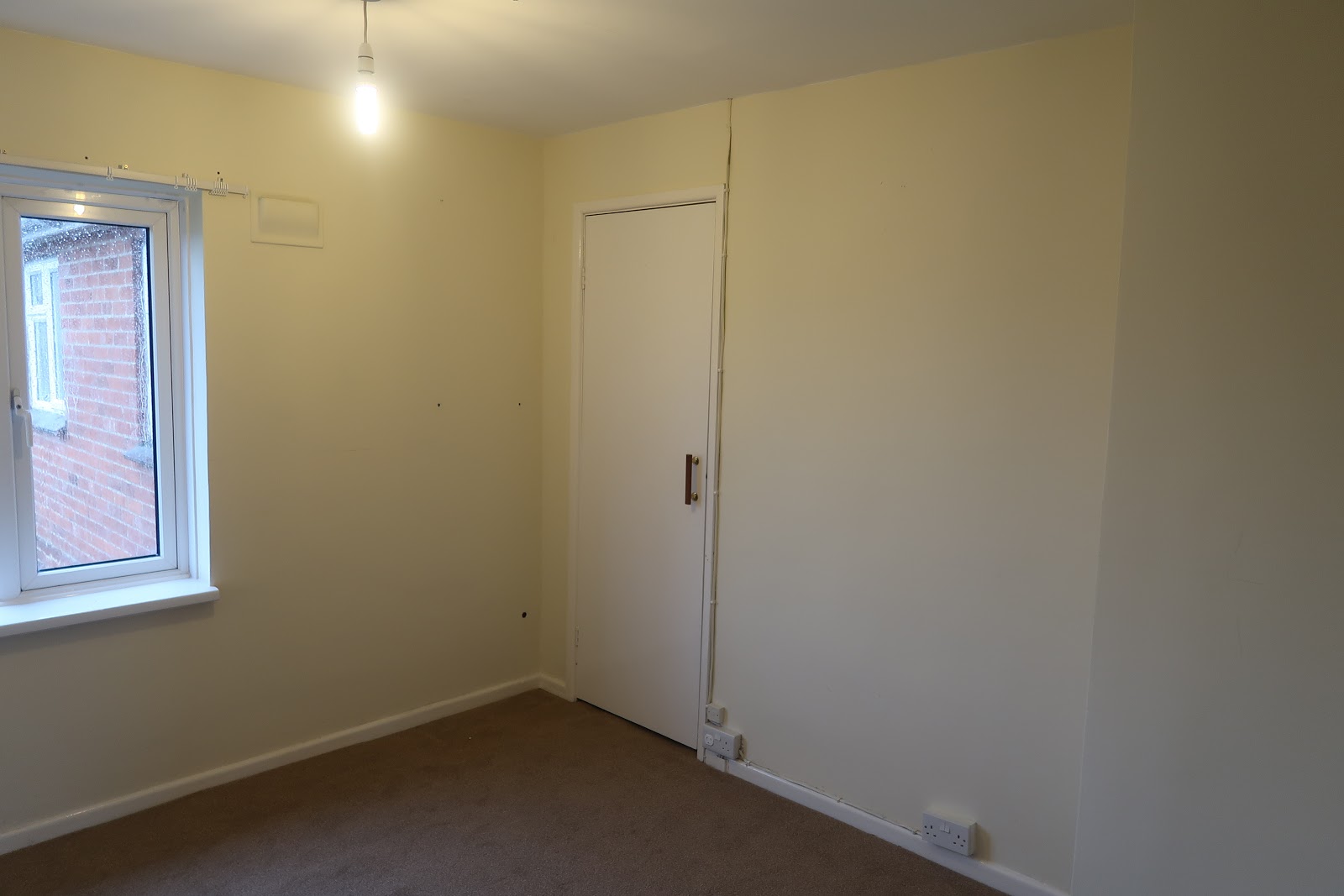 
Still quite a bit to do in Sienna's room: get curtains/blind, put pictures on the wall, finish the gold tape, get her a desk, build the shelves in her wardrobe, get her a rug... But we're getting there and at least she can utilise the space now and sleep in her own room! She was out all day with my mum and when she came home she was so surprised 💖 swipe for the before!! Ps. I know it may not be the first choice you'd put the bed but she was adamant she wanted the bed here and I didn't want to undermine her choice. It's her room after all 💖👍 #mumofgirls #homereno #mydailyreno #ourrenovationstory #storyofourhome #mydailyrenovation #ourfamilyhome #cornersofmyhome #girlsbedroom #vinylflooring #myhappyplace #beforeafter #pinkroom #unicornroom
A post shared by The ConwayClan (@homeoftheconways) on Oct 19, 2019 at 11:48am PDT

The other side of her room before: 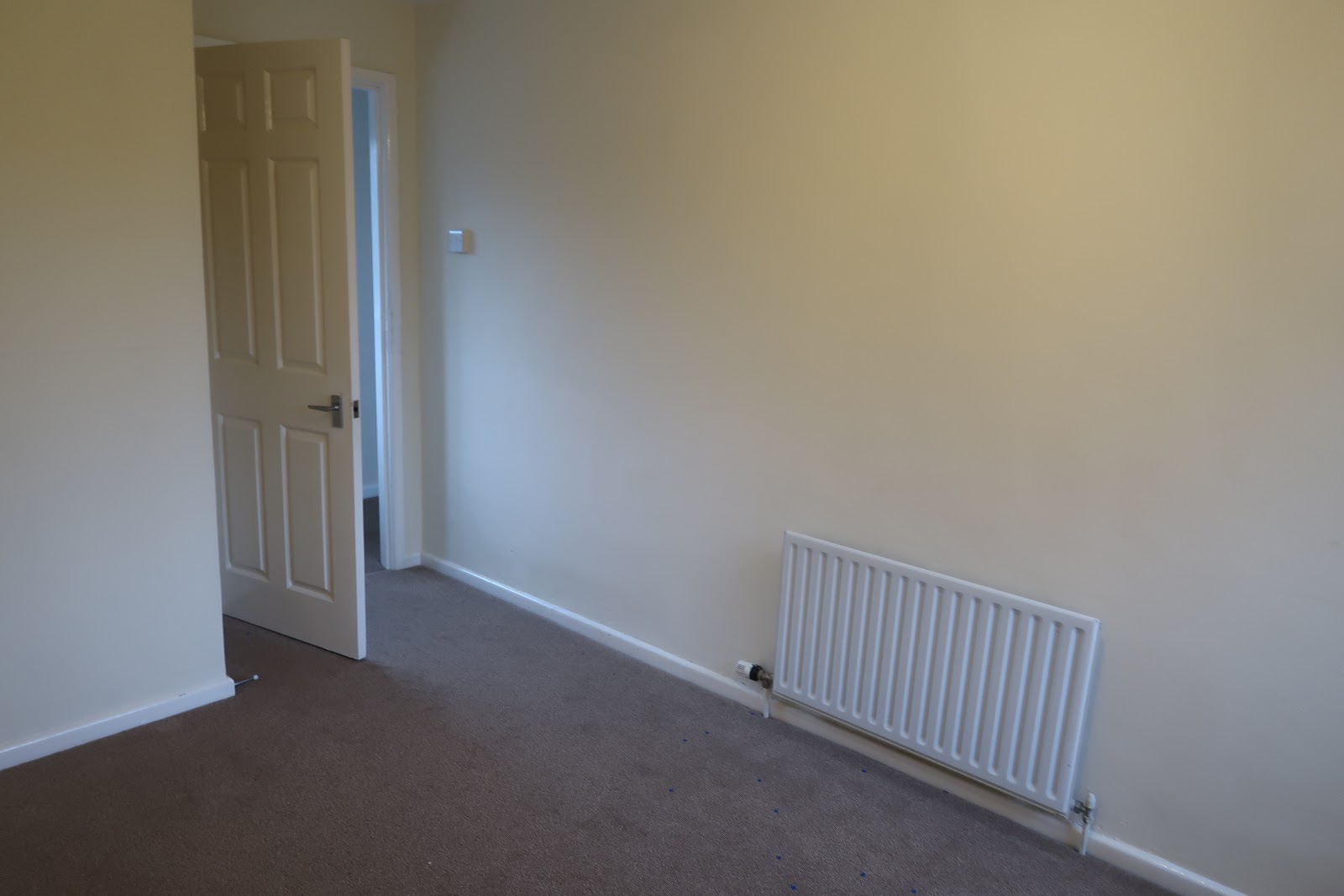 
Sienna's flooring is down! We did it ourselves and it was so fiddly in the cupboards and corners, luckily those bits are easily disguised 🤣 I did also paint her skirting boards believe it or not but they are still so battered. We're looking at the skirting board covers you can get to just fit over the top of these because trying to get then off is such a b*tch! Anyone used them? Ps.. We ran out of gold tape, another roll on the way! #mumofgirls #mumofthree #wingingit #channelmumvillage #storyofourhome #mydailyrenovation #ourfamilyhome #cornersofmyhome #girlsbedroom #vinylflooring #diyrenovation
A post shared by The ConwayClan (@homeoftheconways) on Oct 15, 2019 at 11:14am PDT

It needs some finished touches again so when each room is done I will do full blog posts on them!

The outbuildings have not been touched - we are hoping to turn those into a playroom for the kids at some point. We were hoping next year however the quote came in at over double what we thought so we may have to wait a bit longer or do most of the work ourselves which will also take a long time between normal life with 3 kids!

Bathrooms have not been touched either and our bedroom is a dumping ground!

We have done quite a lot of DIY throughout the house to keep costs down so I am hoping to blog about some of those over the next couple of weeks.

Hope you enjoyed these before and afters and look forward to the next house post!

Email ThisBlogThis!Share to TwitterShare to FacebookShare to Pinterest
Labels: before and after, DIY, home