I have had a lot of questions since putting my pictures of our trip to Peppa Pig World on Facebook... Is it worth the money? Did Sienna enjoy it? Would you recommend it? So I thought I'd try and do a mini review rather than just sharing our pictures. *We were not sent to review Peppa Pig World as a blogger however we did win our tickets in a competition, but paid for food etc ourselves*

When we arrived it was almost surreal, the Peppa Pig music is playing and everything is so familiar, even Warren said he felt like he was in the programme, haha! It was a lot bigger than we realised, Peppa Pig World is just a section of Paulton's Park but you could easily just spend the whole day in there if you only have babies/toddlers. 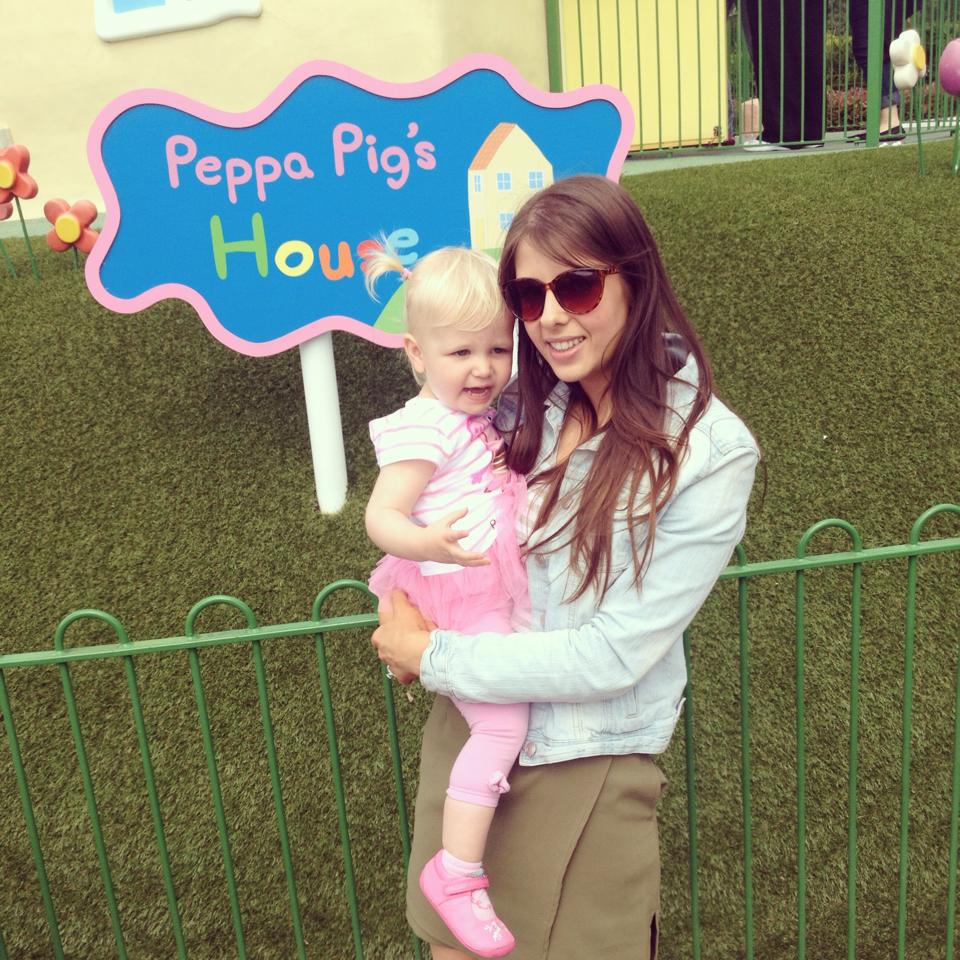 When we first got there, we just had a wander around to get our bearings as see what we wanted to go on first. Sienna also had a little play in George's Spaceship Playzone to stretch her legs after being in the car for the journey. We then tried to find which one of the 7 rides had the shortest queue… that was hard and in the end we gave up. The queues are big everywhere as expected for somewhere so popular, it can be hard when you have active, whining toddlers but Sienna did well and none of them were too bad. The first ride we went on was Daddy Pig's Car Ride. 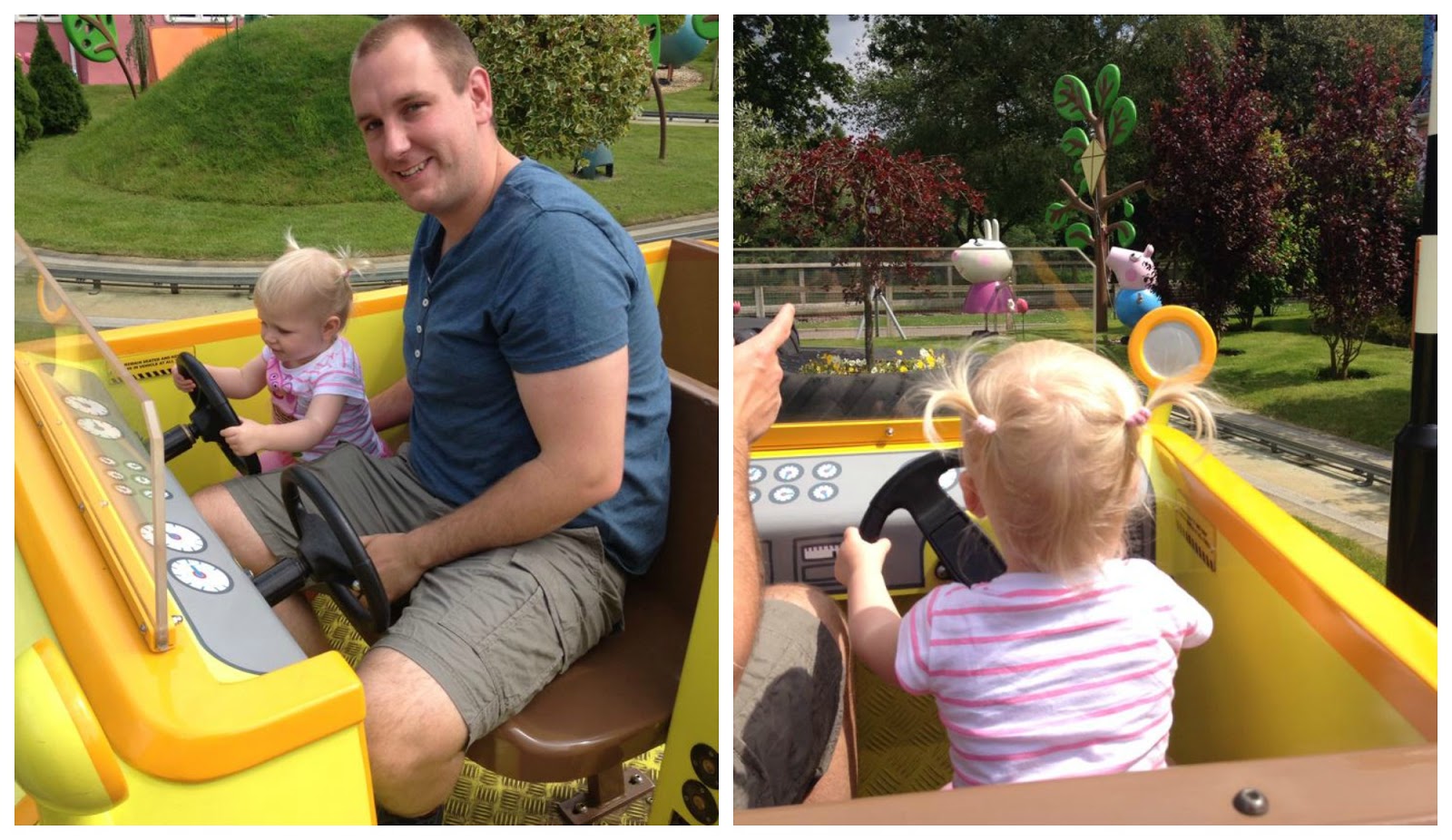 Sienna loved the fact she could drive herself and was turning the wheel like crazy shouting 'beep beep'. There was George and Suzy and some of the gang dotted around to see on the way round and also a camera that takes your photo as you're going round, you can then buy it afterwards although we all had our backs to the camera! haha! Needless to say we didn't buy our photo (prices start at around £8 for one photo I think)!
*This ride is unsuitable for 12 months and under, under 4s must be accompanied by an adult but 4 years+ can go on by themselves.

Next we decided to go to Peppa's house! I must admit, I was expecting a bit more personally but Sienna seemed to love it so that's all that mattered. It was basically just a big room with Peppa, George, Mummy & Daddy but all giant sized. They were making pancakes and do move, there's also music and you can hear them talking, it is just like being in one of the episodes. Sienna was transfixed, I don't think she said one word in there, she was just staring haha, bless her! 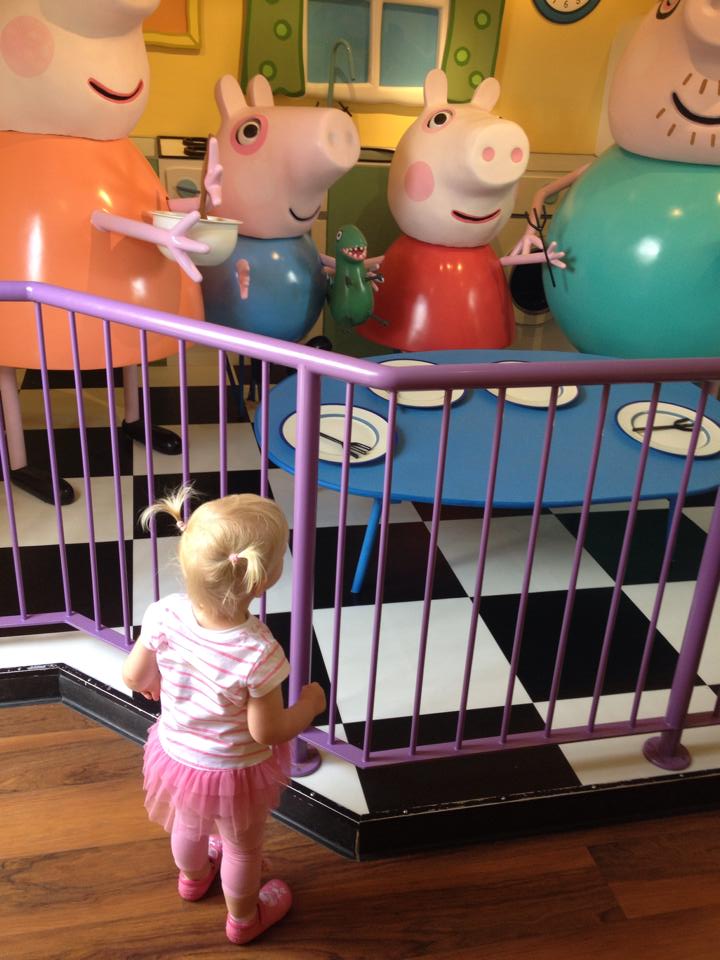 Mr Potatoes Playground is a great area, it's basically a big, colourful park. It has slides, bridges, little houses, wooden trains and a rainbow path you can follow. It is great for the kids to get out some energy and have 'free time' between queueing for rides. 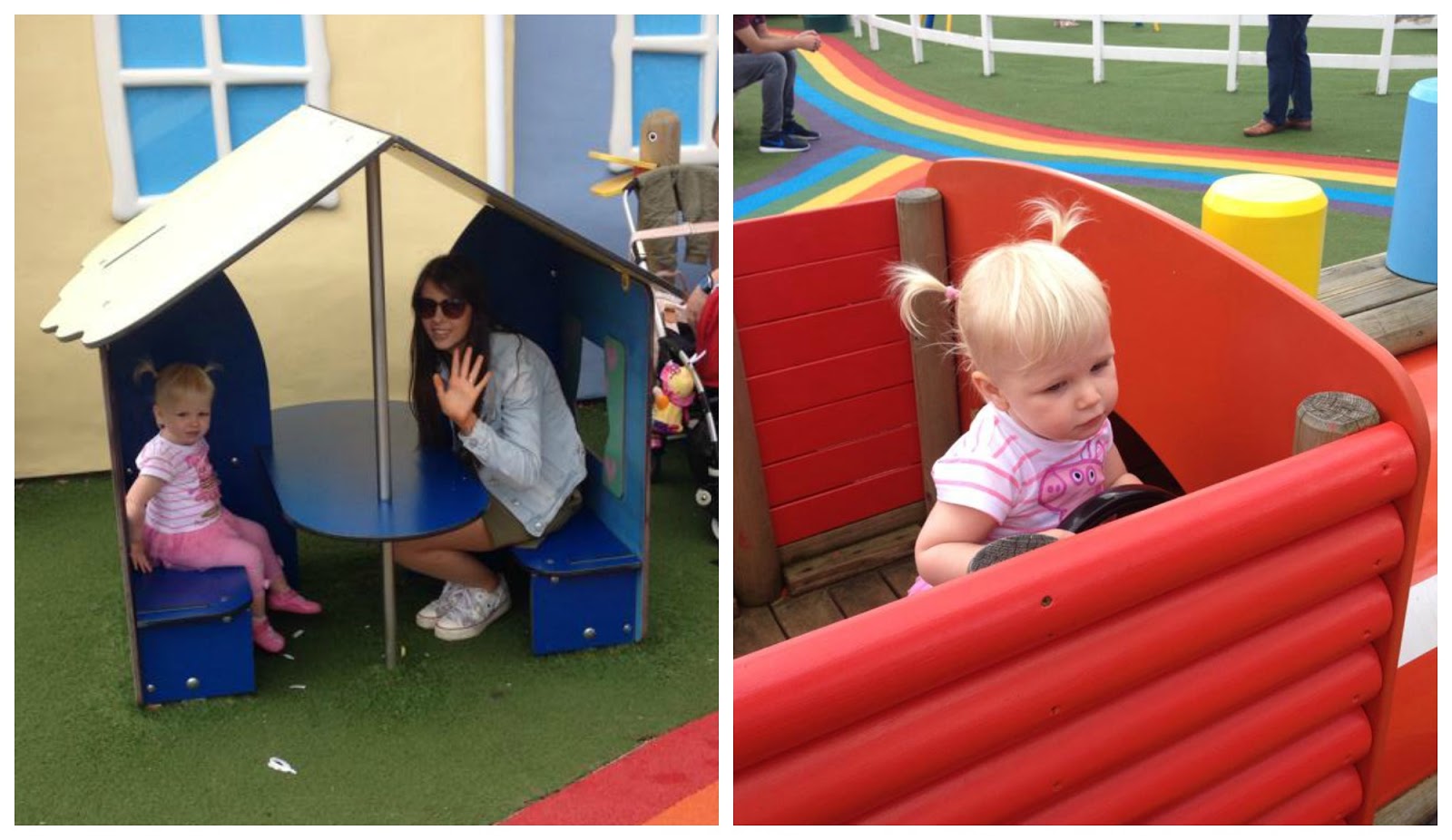 Around 12, we went to find some lunch. There is Daddy Pig's Big Tummy Cafe actually in Peppa Pig World for takeaway kind of sandwiches, hot dogs and kids boxes etc. although we had been told that the Wildwoods cafe near the entrance of Paulton's Park had the most variety so we decided to go there. (It's only a short walk from Peppa Pig World).

I got the club sandwich with chips and coleslaw, Warren got a jacket potato with chilli and cheese and we got some garlic bread on the side. We didn't get Sienna anything because a) I knew she'd be too distracted/tired to eat properly and b) I wasn't impressed with the menu, it was sausage, chicken nuggets or veggie something with chips and beans or spaghetti bolognese or chilli and rice. She would have eaten the spag bol or chilli although she would have made the biggest mess and since she was wearing all white & baby pink, I didn't think it was wise! She ate the garlic bread, some of Warren's salad and a bit of my toast. Warren's chilli jacket potato was really good and my sandwich was ok, we actually swapped half way through as I preferred the jacket potato! It was quite expensive but you expect it in these kind of places!

See the Vlog below

Email ThisBlogThis!Share to TwitterShare to FacebookShare to Pinterest
Labels: day out, Sienna