A week of Greggs breakfasts!

When Greggs contacted me about their breakfast range, I knew it would be perfect for Warren to try. I have mentioned before that he often doesn't have time for breakfast and being on the road all day, he tends to grab the unhealthy options of drive throughs.

Greggs recently released the 2015 breakfast report and found that 39% of people don't have time for breakfast in the morning and only half of brits eat breakfast at home every day. They offered us the chance to have a week of Greggs breakfasts to see what he thought of them. 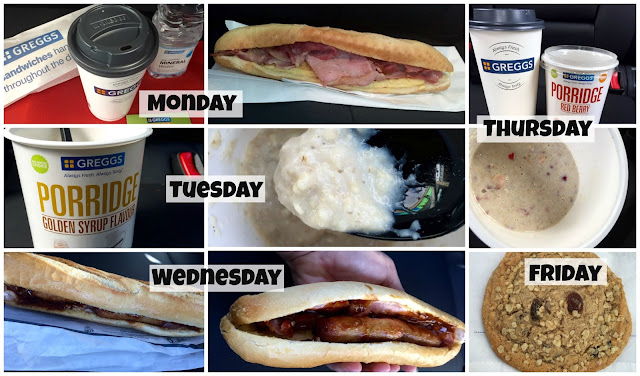 This was how Warren's week shaped up in terms of the Greggs breakfasts;

On Monday when he first went, he said the queue was out the door which shows how popular the Greggs breakfasts are! He could see why as he said his first breakfast of the omelette and bacon baguette was really good and that he was happy it was 'proper bacon' and loaded with it! He also said their coffee was good too and the price point was brilliant. The porridge pots he had on Tuesday and Thursday were good, pretty standard as far as a porridge pot goes. The bacon and sausage baguette on Wednesday was really good too, nice sausages. On Friday, he got the cookie and he said it was good although not very filling, it would go well with a porridge pot to make a more filling breakfast for him. He favourite was the Omelette and bacon baguette by far.

He enjoyed his week of Greggs breakfast range and will definitely be back for a breakfast baguette and coffee. I also think I need to try one of those fruit & oatie cookies as they look delicious!

Are you a fan of breakfast? Have you tried the Greggs breakfast range?