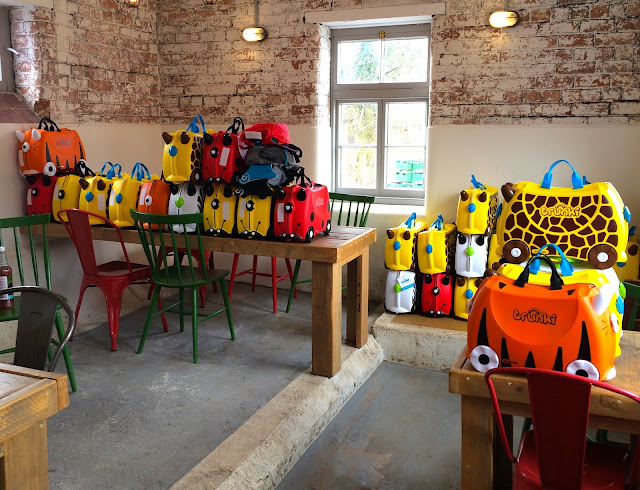 One of Sienna's favourite things is animals, she absolutely loves learning about them and meeting all different types, so when Trunki invited us along to a blogger event at The Wild Place Project in Bristol, I couldn't turn it down. 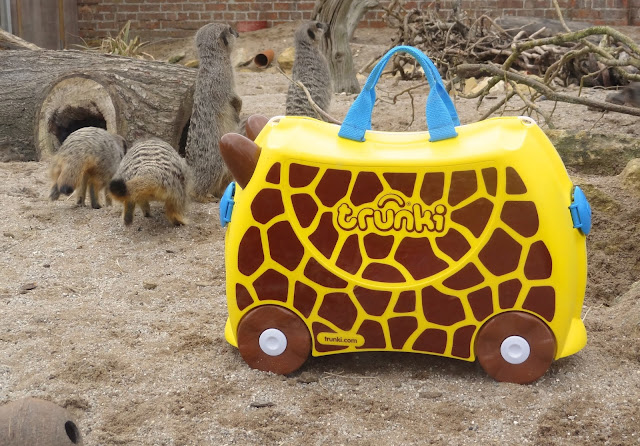 Trunki are working with The Wild Place Project to help raise money for their appeal to build a new Giraffe house and support the conservation work that they’re doing in the Congo. They are launching the new Gerry the Giraffe Trunki on Tuesday 29th March and will be donating £5 to the zoo for every case sold, how fab is that?! They organised this brilliant blogger event so we could find out more and help spread the word about this great collaboration. 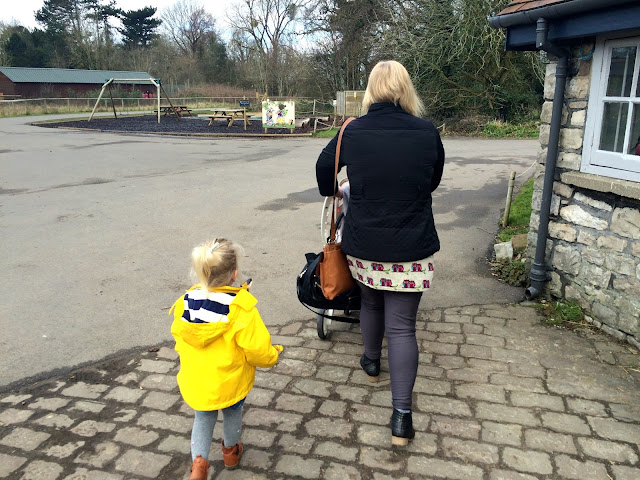 I did take my mum with me as I couldn't brave a day out with the two girls on my own just yet! 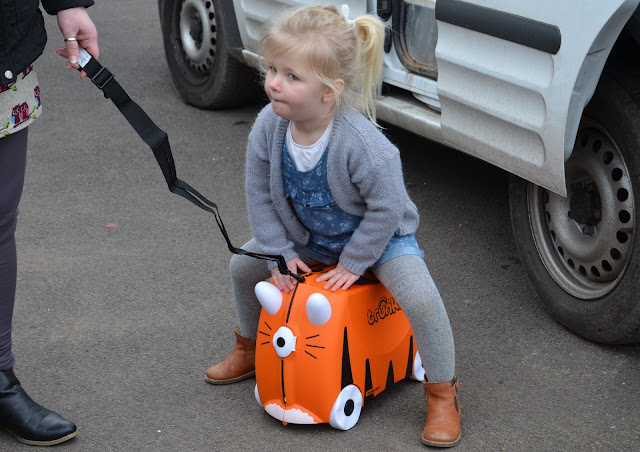 When we arrived we were greeted with a room full of Trunki's.. very exciting! Sienna was givn her very own Trunki and PaddlePak and other bits and bobs which was very generous. We then got to exploring and meeting the animals! 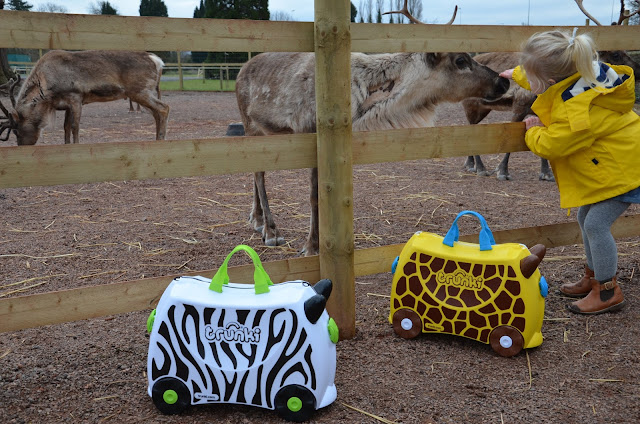 Sienna loved meeting the reindeers, as soon as she seen them she said 'wow mummy, this is the best place ever'. She was very excited to meet Santa's reindeers and got stuck in there trying to feed them and stroke. She is so confident with animals it's lovely to see, even a few people commented on it which made me feel so proud! 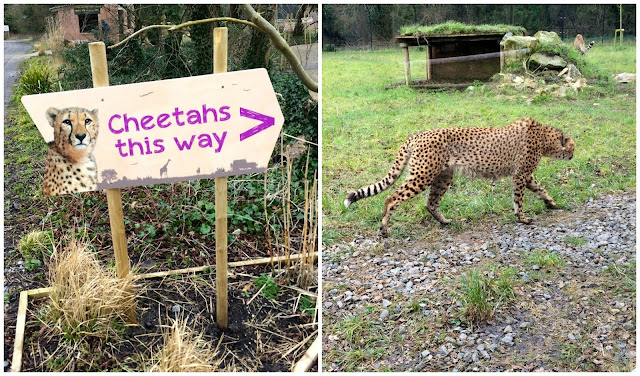 It was amazing to see the cheetahs so close, the keeper actually chucked in some type of bird for them as it was feeding time and so they were eating them. I did think it was a bit graphic for kids to see but none of them batted an eyelid and I guess it teaches them about the circle of life and what different animals eat. 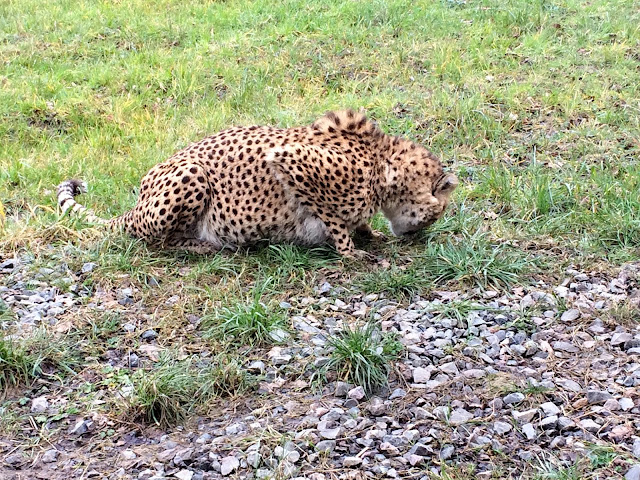 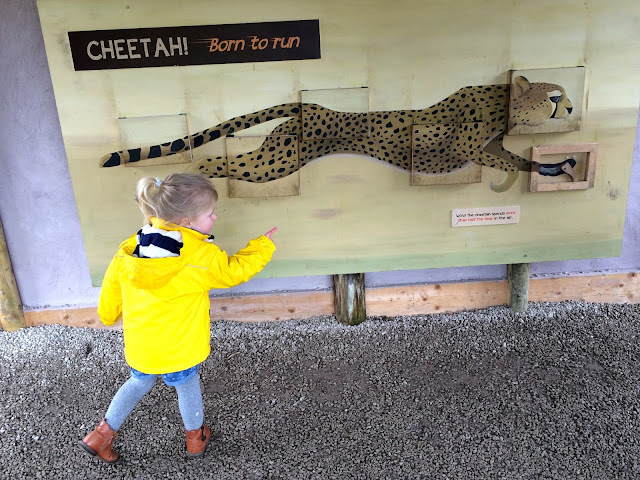 There were zebras in the old Giraffe house..it isn't big enough now for Giraffe's which is why they need the money to build a new one. 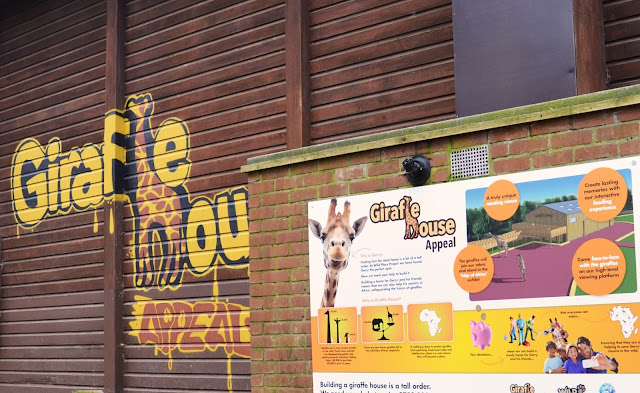 They need to raise 750,000 and we were told they aren't too far away.. they are hoping to start building around September which would be brilliant but of course, the sooner the better. 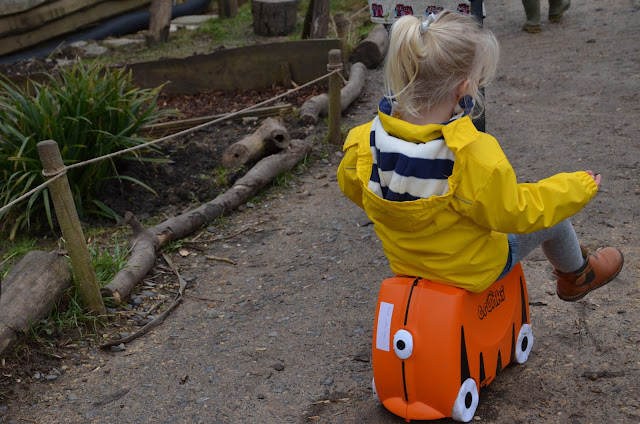 In between seeing the animals, the kids had time to play and explore which was fun. Sienna loved riding her Trunki round or being pulled by Nanny! 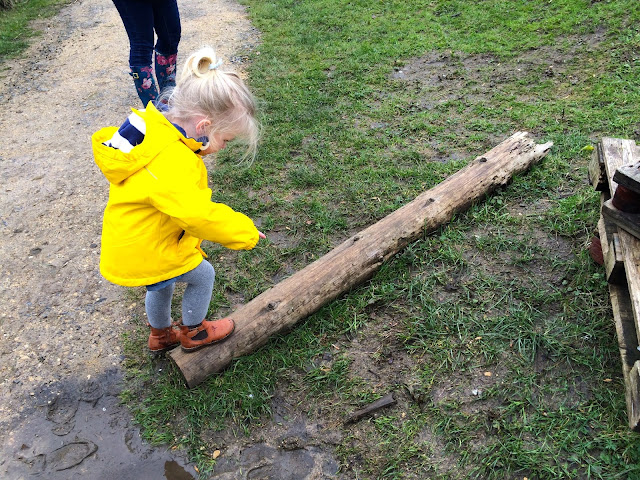 In the Madagascar village there were just friendly goats roaming around playing with the kids which was fun! 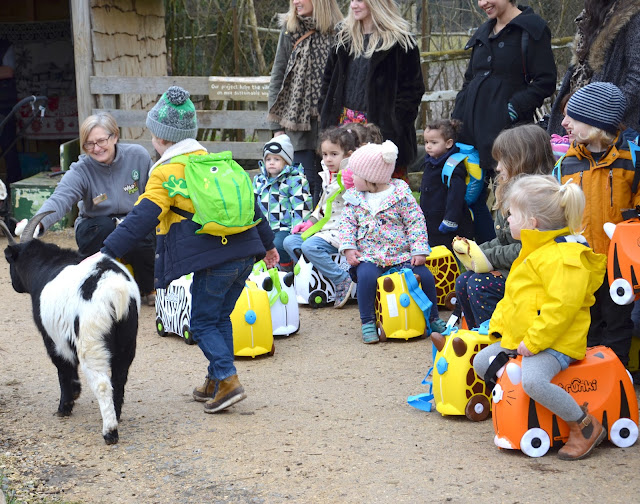 There was an information hut and the lady got the kids to sit down and they did some activities and games which kept the occupied and having fun but they were also learning through play as well which is something we love to do. 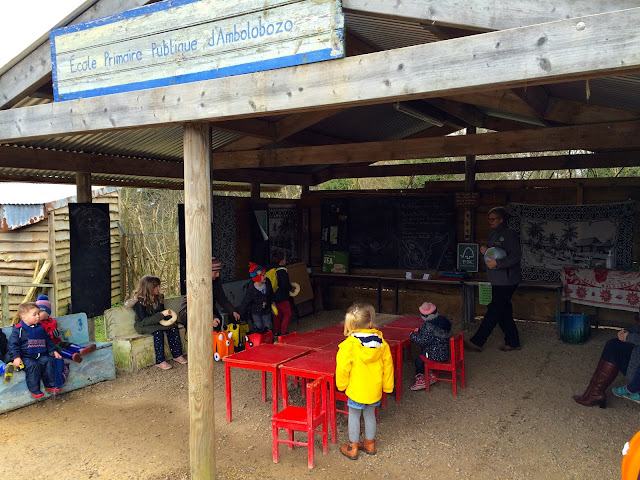 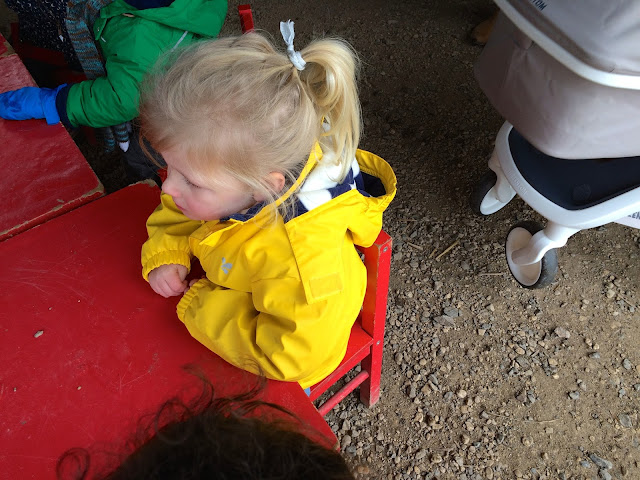 They also got to hold a giant cockroach which Sienna loved.. she was laughing as she said it felt tickly, haha! I know she loves animals but I was surprised she wanted to hold it and didn't chuck it off straight away. 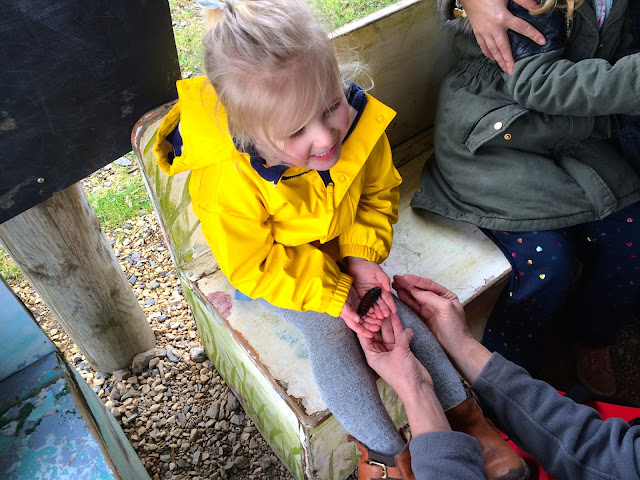 Next, we saw my favourite.. lemurs! 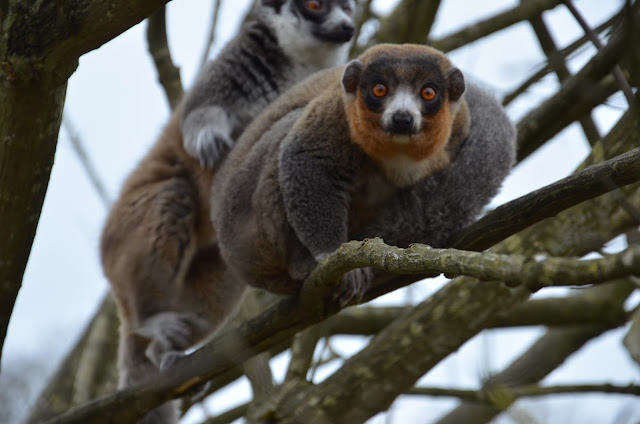 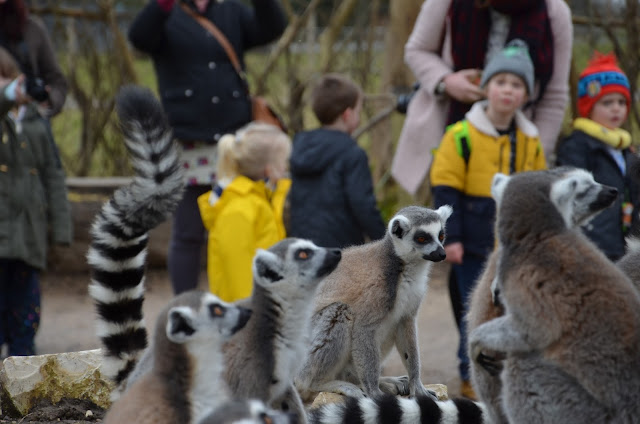 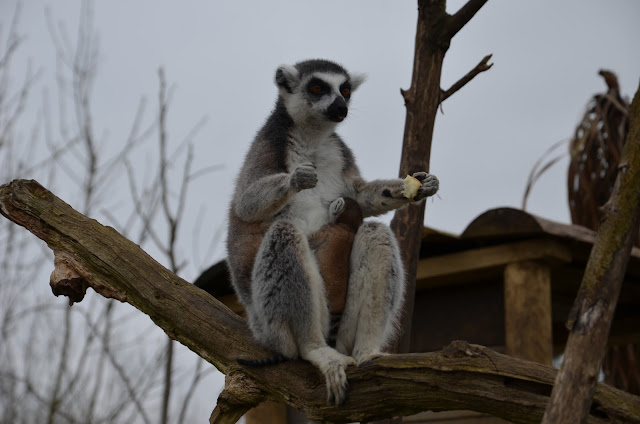 My mum actually took Sienna into see these as I was feeding Aria but they really enjoyed it. A zookeeper joined them and gave them a talk about the lemurs so again they were learning but could see the lemurs hands on. I'm so gutted I missed it as one of the lemurs had had twins the night before and came out with them, so cute! I wish I had seen them but I'll make do with the photos! 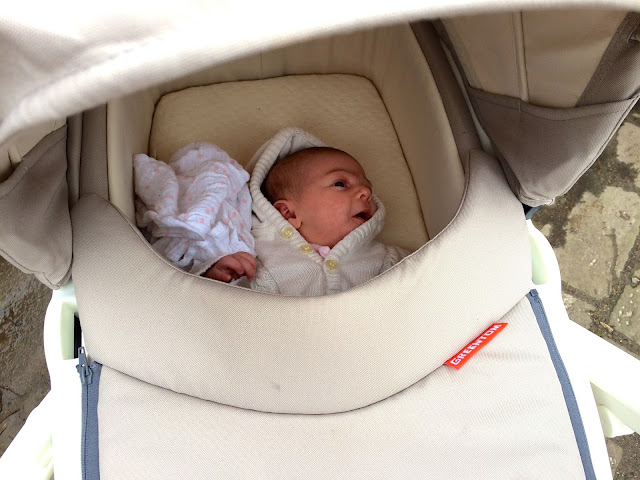 When we had finished seeing the animals we headed to the Cafe for lunch which was nice to warm up as it was a really chilly day! Sienna had such a great day and you can see from above, even Aria enjoyed it! ;) 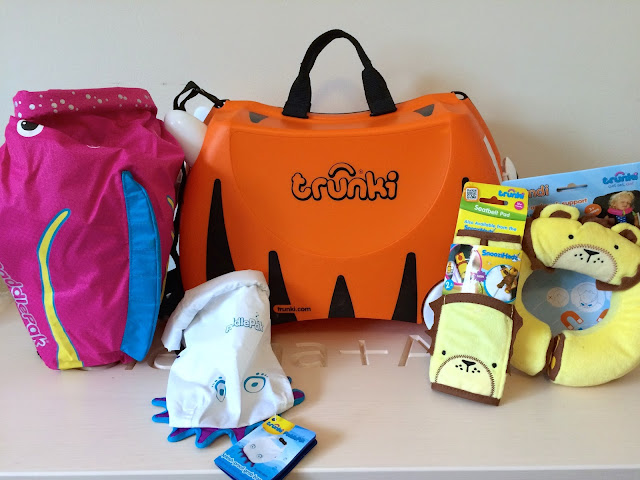 When we got home, we had a look at everything Trunki had given the girls (Aria also got the little seatbelt pad, neck rest and grab bag) and we were overwhelmed, such lucky girls! 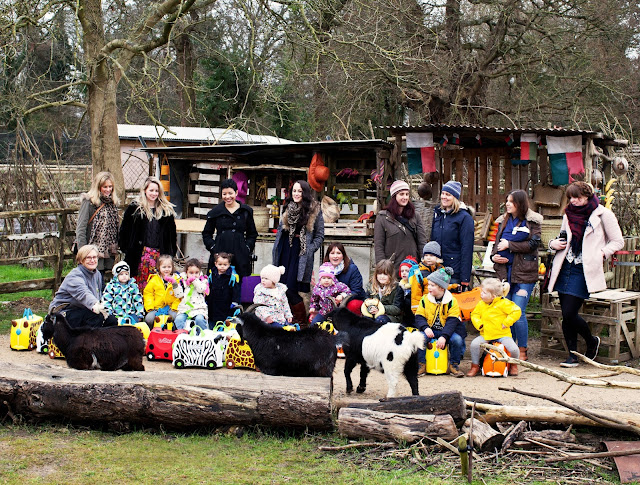 Thank you Trunki and The Wild Place Project for such a brilliant day and event! We really hope you raise the money needed and will be back to visit again when the new Giraffe house is built!
You can read more about the Giraffe house appeal here.

Email ThisBlogThis!Share to TwitterShare to FacebookShare to Pinterest
Labels: days out, Trunki