That time we got broken into

I'm not sure if I've ever touched on it before, but when we lived in Bristol, we got broken into and it was one of the scariest times. When Warren was recently away for 4 nights for his stag do, I found it pretty scary being in the house with the two girls on my own. I kept reliving the break in and panicking about what I'd do if it happened while the girls were here and how we'd get out. 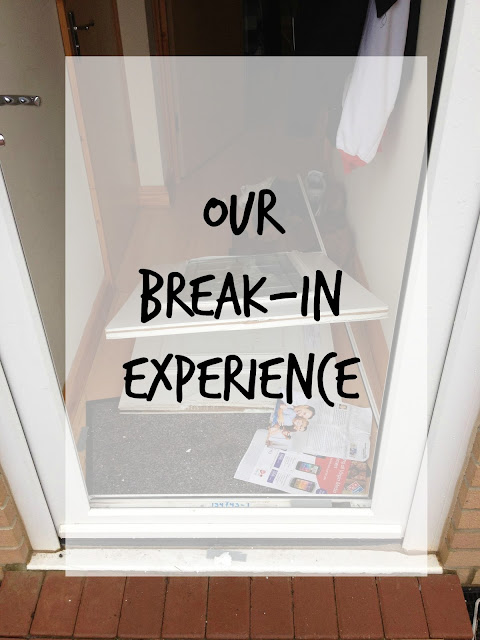 I was home in the afternoon, at around 2pm I decided to do a workout, like I normally do on any days off.. I was halfway through when I heard a loud bang on our front door. I never answer the door when I'm on my own and being halfway through my workout, I chose to ignore it... hoping they'd think no-one was in and they'd go away.

A split second later, I heard voices and decided to look out our lounge window to see who was out there. I jumped back as there was a guy stood with his back to me leaning against the window. I could hear him swearing and at first I thought he was on the phone and just angry.

My thought process was; He's on the phone, he got angry about something, he thinks no-one is in so he's kicked the door in frustration. If I leave him to calm down, he might just go away.

I picked up my phone just incase, I was about to ring Warren just to tell him what had happened, when I heard another massive bang on the front door but I could see the guy was still at the window, so it clicked there was more of them. I open our door to the hallway so I could see the front door and screamed when I saw our front door was half way off it's hinges and 3 more guys were kicking it down.

I just remember screaming 'WHAT THE F*CK ARE YOU DOING', 'GET THE F*CK OUT MY HOUSE'. I thought if they realised someone was home it would scare them away but they just kept kicking. I knew I had to run and luckily, I knew our back door was open.. I ran as fast as I could to the back door, kicked the tumble dryer and rubbish out the way and flung the door open. By this point, I could hear they had got in and were coming through the house towards me.

Like in a scary movie, you would think it would never happen in real life but I slipped over when I got out the door and could hear them getting closer. I was so panicky, I thought they were going to get me. I knew I just had to run but it felt like I couldn't go quick enough. I felt like I was literally running for my life.


Round the side of our house, was the front door to the flat above ours. I didn't even think, I just saw the door and ran in.

THANK GOD the door was open and my neighbour was in! She had heard me screaming and was half way down the stairs with her keys to lock the door so no one got in. As she locked her door, we saw the guy run past the door and back out to the front, by the time we had got upstairs, they had got into their car and we just saw the back of the car speeding off.

I looked down at my phone because I could hear talking and somewhere along the way, I had dialled 999 and the lady on the other end of the phone was asking if I was ok. I was so shocked I couldn't speak I just had to hang up. She rang back and I managed to compose myself and tell her the whole story calmly.

I then rang Warren to explain everything and he said he was on his way and then 10minutes later, the police arrived. They checked the property and the door was literally collapsed in half and I had to check nothing had been taken or moved etc. They hadn't taken anything which was weird and still puzzles us now. It almost feels like they were after me.

Needless to say, I'm always a little cautious now when I'm in the house and I always have an escape route in place! I also always keep a hallway light on at night, especially if I'm home alone. Something else I do as well is keep the key in the back door so that I can easily unlock to get out if I have too. If back in our little flat, the back door had been locked, I'd dread to think what would have happened as I wouldn't have been able to get out at all and they would have got me. 4 guys against me doesn't sound much chance. We also found out 2 weeks later than I was pregnant with Sienna so it doesn't even bear thinking about! I'm so lucky I didn't miscarry after the stress of it all... it took me ages to feel safe in our own house again.

Something else I'm looking at doing it installing the panasonic outdoor camera. It would just put my mind at rest when and if I hear noises outside.. I'd know I can check on the camera instead of wondering what it was and making up stories in my head! I've been looking at other safety features for the house such as fire protection online, just incase!


Do you ever get anxious at home alone? Are you worried about break ins?
*In collaboration with panasonic