A Sunday roast is something that everyone enjoys eating in our house, in fact it doesn’t have to be Sunday for us to have a roast. It might seem like a simple meal but I think the little extra touches make all the difference, like a really delicious, meaty gravy and some sauces that complement the meat perfectly. Here’s my guide to what sauces lift a roast dinner to the next level. 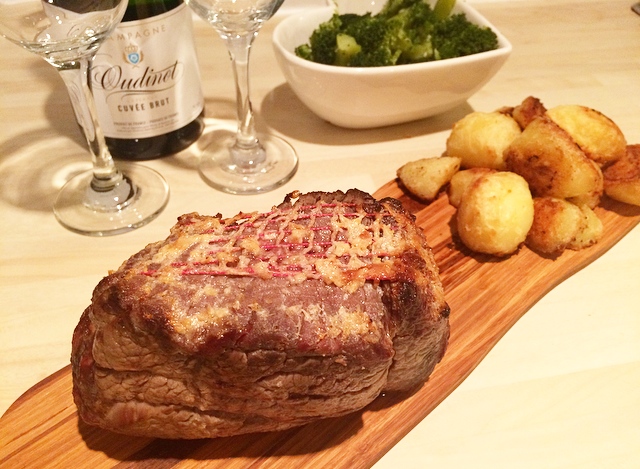 It’s all gravy
Meat, potatoes, vegetables and Yorkshire puddings – alone they’re four elements vying for attention on your plate, but add a glug of gravy and it has that inexplicable ability to hold everything together. Gravy has to be rich and thick, and to me that means using the meat juices and packing in flavour any way you can.
Sitting your meat on a bed of veg when you roast it – onion, carrot, celery, root veg like parsnip and a bay leaf – imparts flavour into the juices, while you can also use the veg to thicken the gravy. When the meat is roasted, spoon off any excess fat and remove the bay leaf before adding a little of the water that you boiled your side of vegetables in. Blitz with a blender and add a bit more of the juices until it’s the right consistency. Season, then add a knob of butter at the end for sheen and depth.
If you do get a chance to have dinner when the kids have gone to bed, pep up your gravy by replacing some of the vegetable water with red wine, creating a jus for two. This works particularly well with roast beef and poultry like pheasant or duck.
When I’ve gone to all that effort to make a good gravy, I often want to make a shortcut elsewhere and the best one I’ve found is using McCain Roast Potatoes. The crispy roasts come straight from the freezer, using proper British spuds and beef dripping for bags of flavour with no fuss.

A shot of flavour on the side
As we all know, there are tried and tested sauces to match your meat, but which ones are worth the extra effort to make yourself? Well, quite a few I think! While I may not bother going to the effort of making my own horseradish sauce, options like mint and apple are super easy to make. Cranberry sauce also tastes so much better homemade. Here’s how…
To whip up a quick mint sauce, all you need is mint, salt, water, sugar and some classic Sarsons vinegar. As you know exactly what’s in it, you can be assured of no nasties. It’s a similar case with apple sauce, which is literally just bramley apples cooked down with a bit of sugar. Some recipes also call for lemon juice and a knob of butter, or to make it a bit more savoury add a pinch of salt.
For one of the best sauce accompaniments to a roast, it has to be sweet-yet-sour cranberry, best served with chicken or turkey and of course some stuffing too. Either follow this easy recipe exactly, or replace the port for orange juice if the little ones are trying it. And as a bonus, you can freeze the sauce ahead and defrost it at the same time you put your meat in the oven.